Written by Nick on 7th Dec 2015. Filed in Online & Technology

WordPress has a big following, don't however make the mistake of thinking because lots of people use it, it must be better than any other system you don't read as much about. Unfortunately in many cases, the CMS for a site is chosen by a developer not because it's the best tool for the job, but because it's cheap, has lots of templates available, and because they can attract more customers by choosing a CMS that has a large market share.

We use Craft CMS because...

Craft is not a target for hackers like Wordpress, you won't find a single exploit for Craft CMS, as none have been discovered. Wordpress on the other hand has thousands, and is probably one of the biggest targets for hackers.

It absolutely blows Wordpress out the water on usability, I've not found any content management system that has the ease of use that Craft has without sacrificing it's flexibility to do just about anything

In all my tests it's resulted in pages that load faster.

We are able to implement the large portion of site functionality without the need for addons and plugins. This makes cost of ownership lower, as you don't need to ensure addons are compatible before performing upgrades, and there is less chance of things breaking.

Craft has good commercial support, additionally the community is VERY knowledgeable. Because it's a system picked for it's capabilities not because it has a good template marketplace, we see that the overall community has a much higher level of skill. Often Wordpress is seen as a good choice because there are many people available with Wordpress skills, I would argue (and from my own experience), a large percentage of developers claiming Wordpress skills actually have enough to get the job across the line, but not a high level of skill to do the job right.

Honestly I could keep going on reasons to use it over many other systems, I won't comment on others, I've looked at many over the years but never found anything that stands out other than Statamic, another new system that's growing in popularity, we don't use it as we are happy with what we have.

On the template front, we have never built a site using a template and never will. It's a topic I'm pretty passionate about, but really if you're a designer I don't understand why you would go out and buy a design? If I get a template for a client, I have to make changes to make it fit your needs, so I'm compromising on day one. Maybe I'll save some time, most likely I won't, and I would argue that the upfront investment to get this right from the start is worth it. I couldn't sleep at night if I sold you a website that I knew was used on tens or even hundreds of other sites.

Wordpress has SEO plugins, but SEO plugins are not going to get you any rankings in Google, the CMS has no role here. Only hard work will get you to rank well. We build in all the support that's necessary to drive an SEO campaign, but SEO shouldn't even be on your shopping list in a CMS, flexibility to present your content in an easy natural way should take it's place, as if you have flexibility in a CMS, then you have the flexibility to add in any functionality to drive your SEO without a fancy plugin. 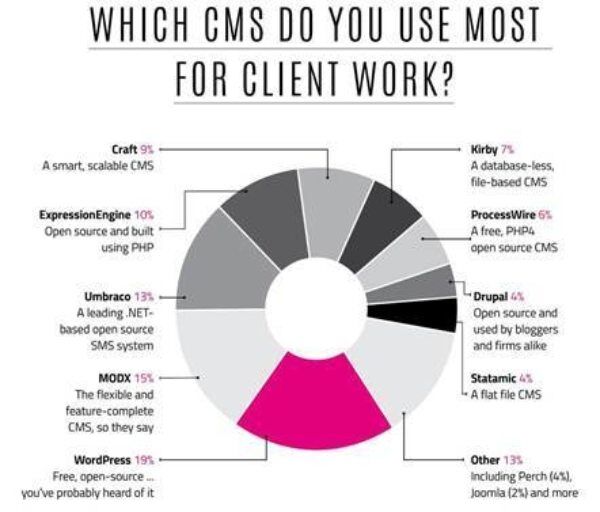 The pie chart is an interesting one, you can read figures however you want, here's my interpretation:

So basically in 2 years, Craft has got to 9%, Wordpress go here in 12 years. We develop in ExpressionEngine too, it's also a very capable system, Craft however we can build sites quicker, and it's control panel is considerably more usable. We have picked Craft over ExpressionEngine for every project over the last 2 years.